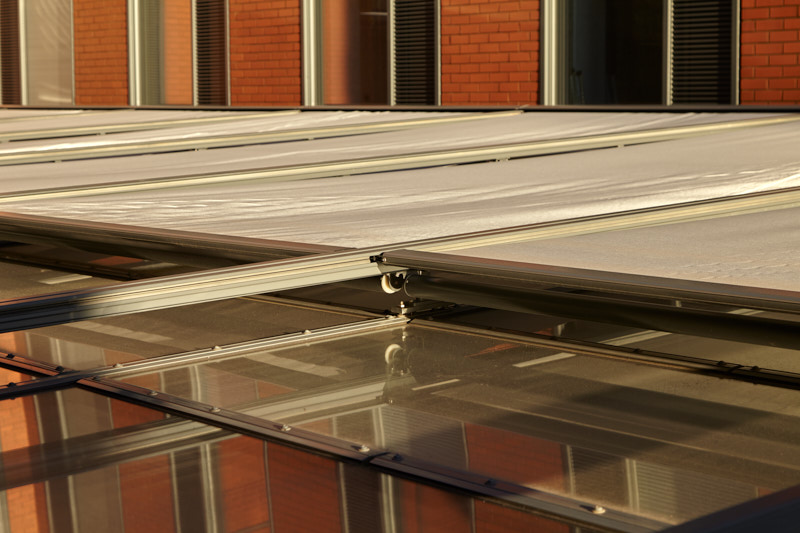 One thing that can be said for photographing buildings is that at least they are predictable.

Well, it used to be like that but increasingly, modern buildings have a mind of their own which can make things more tricky. It started with those buildings which sense your presence and switch on the lights. Great for the planet but not so good for architectural photographers that need all entire lights in an office building to remain on while he operates a camera positioned outside the building and across the road!  The only real answer is to have an trusted Assistant running through the building wildly flapping their arms to keep the lights on.

I recently had a shoot at The new Center for Medicine at the University of Leicester which happens to be the largest passivhous building in the UK. It is a magnificent building by Associated Architects (Main contractor: Willmott Dixson). I was producing photography for DVS who supplied the beautiful Lamilux glazed roofing. It is a prime example of an intelligent building whose mind acts to manage the energy use of the building by operating window and skylight blinds to control solar gain. Again, fabulous for the planet but troublesome to the photographer when the blinds autonomously decide to open or close mid shoot.

Midway through shooting the superb modernisation of a lovely Suffolk cottage for Plaice Architects I found the lights would no longer operate via the wall switches. The owner’s iPad had assumed control from where ever he was in the world and there was nothing I could do about it. Luckily the shoot was pretty much complete by then.